Observing the Experts (Who Are Rarely Adults, With This Exception)

For the past week, I’ve attended a multi-age outdoor school led by Teacher Tom, who’s hailed by parenting experts as one of the “world’s leading practitioners of ‘democratic play-based’ education.”* If you haven’t followed his blog or bought his book, you should, and if you can attend his class, even better. Although I exceed the age limit for his class (wait, I don’t look 5?), the cooperative model mandates that I spend at least some time working there while my child attends. Since my child wants me to stay at school all the time and it’s too far for me to drive home while she’s in class, and because I like it there, I stay. All good.

If you know anything about him (or if you don’t, now you will), it’s that he spends a lot of time observing and engaging with the kids. As an observer myself, it’s easy to see how this role suits him. But what does observing Teacher Tom have to do with gentle parenting? Nothing, directly. Besides, he doesn’t fit the “gentle parent” poster image some people have in their heads. He’s not all hugs and feel-goods. As far as I can tell, he doesn’t even shave his face every day (isn’t that in the rule book?). So, if he’s not raising your kid (and he’s not), what does he do that’s so special or different that it warrants your attention? Here’s what I’ve witnessed:

He “gets” them and speaks their language. On the first day of class, he picked up a tiara from the playground dirt (where most of the valuable jewels are kept) and put it on his head. A little girl pointed out that he was wearing it backwards. He fixed his error, and shortly thereafter, someone tried to yank it right off him. My adult brain assumed he’d relinquish it (adults are polite, right?), but instead, he respectfully claimed ownership of it and wouldn’t share. He wasn’t done with it yet.

Without any lecture or adult-infused words about taking turns, he ingratiated himself as one of their tribe by doing what many of them would’ve done. I wondered if his refusal would be off-putting to the kids, but instead, he’d built credibility. He taught fairness without having to “teach” a thing. Many of us fall victim to playing as adults play: borderline fun, but kind of hung up on enforcing rules. We manufacture “teachable moments” and do our best to stay clean. If building connection is your gentle parenting goal, just look at this guy and the way kids flock to him (I’ve dubbed the kids his Merry Band of Followers). We take ourselves far too seriously.

Teacher Tom reminds us that we have our kids’ permission to act like actual kids.

Red cape or not, I’ve seen Teacher Tom leap over a tall play structure in a single bound and break up a heated altercation between young boys. To the extent that he plays like the kids do, he’s also clearly in charge. He sets limits and holds them unapologetically. Fairly. Respectfully. He’s firm without shaming or creating guilt. He corrects behavior immediately when he witnesses a transgression, and then like water off a proverbial duck’s back, he goes on playing. There’s no room for grudges. They’re counterproductive. In following through with his limits without waffling, he builds yet another kind of credibility.

Kids know they can trust him to help when they need him. They don’t wonder whether he’s a reliable leader; they know he is. As gentle parents, it’s easy to second-guess the limits we set in the tough moments and come off as wishy washy. However, no one thrives on shaky ground. Without sacrificing kindness, Teacher Tom reminds us that it’s okay to be firm and direct. And then move on.

3. He has the right attitude.

Teacher Tom challenged the kids to fill a large open canister on wheels, which was at  the top of a small concrete hill, with water. Then, they’d experiment to see what would happen when they released it. The kids obliged, lugging bucketful after bucketful of water up, up, up to Teacher Tom, who was sitting most of the way up the hill. He emptied their buckets into it. Once it was finally full to the brim, Teacher Tom counted down for the Big Release. We all waited with eager anticipation. As quickly as the water-filled canister started picking up speed, it stopped just as suddenly, 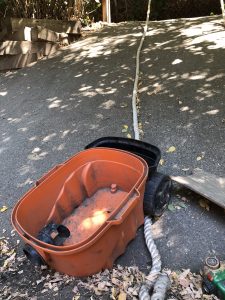 catching on something, and proceeding to launch aaalllllll the water directly onto him. He was drenched in dirty playground water. His response: “That. Was. Awesome.” And he laughed from his belly, just as amused by the surprise ending as the rest of us. He instinctively saw the situation from the kids’ point of view; there was nothing to reprimand. What a great reminder that we’re teaching our kids how to react when things don’t go as planned; what a great way to model resilience.

Before I met Teacher Tom, I didn’t know whether to expect him to be some combination of Superman and Mary Poppins (would he wear the cape and have the magical flying umbrella?), or if I expected some Dad-Gone-Rogue-Who-Never-Left-The-Playground. What I observed, though, is that while he’s kind of those things, he’s foremost really quite human. And you know what, gentle parents? That’s really what your kids need most—the ability to see you as a real, true, reliable, flawed, predictable, and regular person who, with any luck, continues to put kindness first.

To see all the child- parenting-, travel-, and cooking-related items that have stood the test of time in my house, including my favorite books, click here. As an Amazon Associate, I earn from qualifying purchases.

To Take Sides or Not? 1 Creative Approach When You’re Stuck in the Middle

Cleaning with Kids: Fun Strategies to Engage Their Help

How to be a Better Mom: 3 Big Reasons It’s Hard and What to Do About It

5 Ways to Keep (or Get) Screen Time Under Control

You want PRACTICAL and ACTIONABLE parenting tips. That's exactly what we'll send you when you join our mailing list -- and nothing more.

Time-In vs. Time-Out: How and Why Your Discipline Approach Matters

5 Ways to Make “No” a Positive Experience

Boundaries with Kids: 4 Helpful Ways to Support Them from the Heart